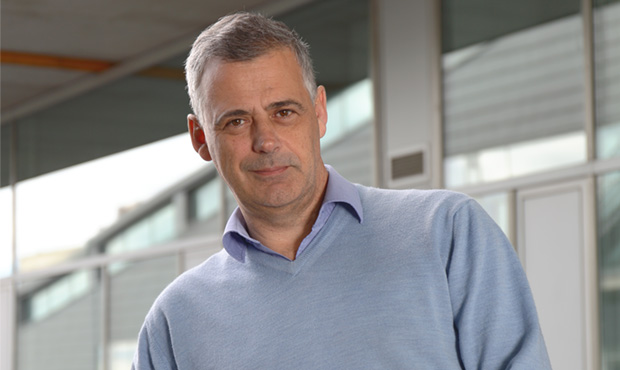 Since 2014, the EBI and the CRG share responsibility for the European Genome-phenome Archive (EGA), a fundamental resource for biomedical research that reinforces the leadership position of Spanish research groups and institutes in genome analysis at a European level. The implementation of this initiative was the result of the work and joint effort of not only the CRG, but numerous organizations, including: the “la Caixa” Banking Foundation; the Spanish Ministry of Economy and Competitiveness, through their ‘Severo Ochoa Centers of Excellence’ programme; the Government of Catalonia; the Barcelona Supercomputing Center (BSC-CNS); the National Institute of Bioinformatics (INB-ISCIII); the ELIXIR infrastructure; and the EMBL-European Bioinformatics Institute (EMBL-EBI). The setting up of the EGA was also helped by its being a pilot project within the European ELIXIR infrastructure. The affiliated head of the EGA Team at the CRG is Arcadi Navarro, who is also the director of the Department of Experimental Sciences and Health at Pompeu Fabra University and an ICREA Research Professor.

Another significant development in 2014 was the creation of a valorisation fund and expansion of the Technology Transfer Office through the hiring of two new people. We also maintained our collaboration with local hospitals and our translational grants continued to support early-stage projects with doctors and companies. The CRG has made a strong commitment to innovation and translational medicine, and we expect to see the first results of the new Technology and Business Development Office in 2015.

EGA is a fundamental resource for biomedical research that reinforces the leadership position of Spanish research groups and institutes in genome analysis at a European level.

Bernhard Payer and Manuel Irimia were hired as new junior PIs in the Gene Regulation, Stem Cells and Cancer programme and the Systems Biology programme, respectively. Payer works on X-chromosome inactivation and Irimia on alternative splicing in brain development. The acting head of the Bioinformatics core facility, Jean-François Taly, moved to Toulouse at the end of the year, and we recruited a new chief for the facility, Julia Ponomarenko, who will arrive at the CRG in March 2015.

As a follow-up to our international collaboration with the Taiwan Academy of Sciences, Academia Sinica, we organised a successful mini-symposium in Barcelona. Novartis continued to support the CRG-Novartis-Africa mobility programme. As part of this programme, the CRG hosted three students from the University of Witwatersrand, in South Africa, and a second call to host three further students in 2015 was launched. Also during the year, the EU-LIFE alliance recruited a new manager, Marta Agostinho, who is doing an excellent job.

We continued to successfully attract European and international funding. Highlights included the ERC Starting Grant given to Manuel Irimia and the H2020 EU-coordinated project MycoSynVac awarded to Luis Serrano.

The CRG is consolidated as a top international biomedical research institute and we hope, while striving to improve our scientific excellence, to also become leaders in translational research.